The WCSU Archives had this in our collections: 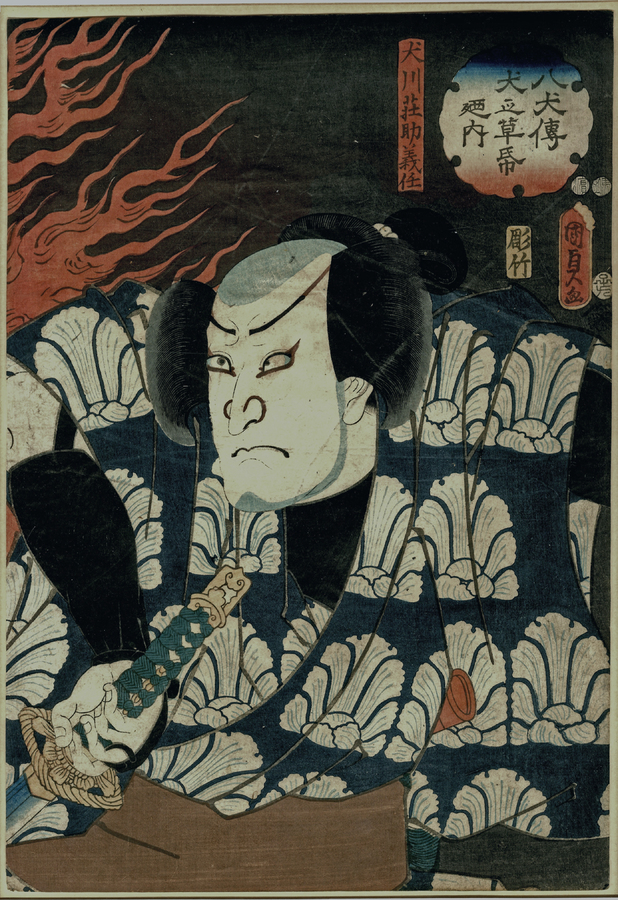 It was listed in an inventory as “Japanese; by unknown”.  While accurate to our knowledge of the piece, it wasn’t going to help anyone searching for a Japanese woodblock print of Inukawa Sosuke Yoshinori.

How did we figure out this was Inukawa Sosuke Yoshinori?  First, we used  Google Image Search.  The initial results were other woodblock prints, but not really similar to our image.  We did find one print where the person portrayed looked similar to ours.  So, we threw that search term in with the image, and voila, we in the first 50 results found a gallery that was selling the same print and they had identified the artist, subject, publisher, and date.  Here’s our current record for this piece.

Based on this discovery, we will be using this to better identify a book of woodblock prints in the WCSU Archive.

Additionally, we found that TinEye search is even better than Google Image Search in this instance at finding a comparable image on the Web.

We also identified a long-unidentified painting (https://archives.library.wcsu.edu/omeka/items/show/1308) from the Marjorie Echols collection.  Is it by Morelli or just a copy?

We’ve made a video to go with our small exhibit in the Haas Library to mark the centennial of the 19th Amendment’s ratification on August 18.

This is a virtual program via ZOOM. Participants will receive a link to the meeting at the email address they provided at registration.

The Trung sisters were Vietnamese military leaders who ruled for three years after rebelling in AD 40 against the first Chinese domination of Vietnam. Join Professor Wynn Gadkar-Wilcox for an exciting lecture on the fascinating history, legends, and cultural impact of the Trung sisters.

Dr. Wynn Gadkar-Wilcox, Professor of History and Non-Western Cultures at Western Connecticut State University in historiography of Vietnam and world history, religion and philosophy. He has given many lectures on Vietnamese history and culture. Professor Gadkar-Wilcox is a graduate of Cornell University with a doctorate in Non-Western History.

DocNow is a tool and a community developed around supporting the ethical collection, use, and preservation of social media content.

The 19th Amendment was passed 100 years ago.  Click here to see a list of archival collections in Connecticut that contain materials on the women’s suffrage movement.

This will also show you how important it is to use authoritative subject headings in your finding aids!

After 1880, James Bailey had seen his last book published; he had remained Danbury’s “news man” in his recently constructed home on Osborne Street until his death from pneumonia in 1894, but his national fame had faded.  In the preface of his History of Danbury, Susan Benedict Hill describes what may have contributed to Bailey’s precipitous drop in creative output:

“…[Bailey] was subject to seasons of deep depression. Years ago, in the very height of his world-wide popularity, his sunny soul would pass at times into profound darkness, when he would pray for death, while yet he would confess that there was no external cause for such despondency.

His love for children was deep and intense, and it was a sad grief to him that his own died in infancy. Every Sunday and holiday saw the tiny graves in Wooster Cemetery covered with flowers, placed there by his loving hands.

… Had he valued money for its own sake, he might have been a millionaire, but money flowed as steadily and profusely from his hands as did wit from his lips. No appeal to him for help was ever made in vain.”

According to a fellow Civil War veteran, Bailey’s bouts with depression also involved drinking.**  He was a Democrat but his paper was non-partisan and he was said to have declined offers by both parties to be Danbury’s first mayor.  Reportedly, he died relatively poor as a result of his extravagant philanthropy.

When Bailey looked out his front windows on 14 Osborne Street,  past the young beech tree, he would have seen the peaceful tops of the hills in Wooster Cemetery and the graves of his children.

Bailey has been gone for some 125 years, but his house remains.  Though, now, that what was until recently a grand beech tree has been removed with little ceremony. Click here to view theatrical posters (and a couple of programs) for WestConn productions from 1971-2004.

Thanks to student Harry Smolin for scanning these for HIS 498 in the spring of 2019.